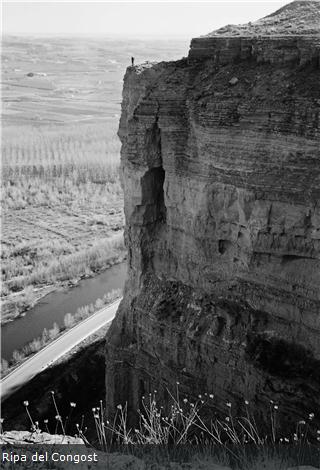 We start from the magnificent Ballobar Romanesque bridge (140 m) that saves the waters of the Alcanadre River in this village of the Bajo Cinca region. We went through the Plaza Mayor and Loreto. In Barranco street we cross the Valsalada or Valcarreta stream. Finally, to leave the urban nucleus, we take the Borale road. After 100 m we turn left, then turn right and we reach some eras. To the east the path starts ascending. We see a young pine forest on the left and the hillside on the right. At 200 m, once the pine forest is over, the road is somewhat broken and with loose stones. We continue the excursion, leaving the valleta del Grado on the right with old work abancalamientos, now barren. At the end the path makes two revolts and empties into the plateau (250 m). Already in it we continue northwest, with no apparent road and surrounding a field of work where the aliagas are faithful companions of our march. After it, we are at the top of the ripa del Pilar (260 m) with its 100 m of almost vertical fall. The panoramic of the urban helmet of Ballobar is exceptional, emphasizing the bridge with its four bays on the Alcanadre.

We continue in a southeasterly direction at the edge of the ripas. These are formations of steep rocks, cut in slope, of remote origin. On the left we have the abyss and on the right next to us there are wastelands and further cultivated fields. During our tour we enjoyed the wide visual that is contemplated. Irrigated crops provide a diverse range of colors. The towns of Chalamera, Albalate de Cinca, Belver, Osso and Zaidín are scattered, providing a significant population density to this area. When we walk 15 minutes from the ripa del Pilar and in a wide curve of the terrain, we observe in an exceptional way the fusion of the Alcanadre River to the Cinca, surrounded by a beautiful environment where the tamarinds and a varied ornithological fauna abound. Our attention is drawn to a wild olive tree that survives on the cliffs. Soon we reached the Ripa del Congost (270 m), the most impressive due to its verticality. Here we appreciate an interesting perspective of the ripas we have traveled and the town of Ballobar. Against the background we have the silhouette of the Pyrenees. If we look to the southeast we can see the works of the future high-speed railway.

We returned along the same itinerary of the first leg, appreciating new angles. In the background, we see on the other side of the valley the silhouette of the mythical hermitage of San Juan, where we are heading. We finished the tour of the plateau and arrived at the point where we began to descend. We do the revolts, we go straight and we go through the pine forest. After the area of the eras we cross again through a bridge the canalized ravine. Then we take the track of the cemetery, progressively gaining height. We leave the cemetery and the uncovered water tank on the right. After a couple of loops and on a plain, we deviate by a track that starts to the right. This takes us to the hermitage of San Juan (250 m) that is accompanied by a solitary pine tree. We contemplate a new panoramic, that associates the ripas that we have visited with Ballobar.

On a path, in gentle descent, we go down three loops that end in the old deposits of the town. Continuing along Libertad Street and then along Avenida del Alcanadre, we return again to the magnificent Romanesque bridge.

Ballobar: Villa, with its own municipality. Its urban center is a curious labyrinth of streets. The parish church of Santa María de la Asunción is a single nave, the apse dates back to the twelfth century and the main altarpiece of the temple is Baroque. Don Paco's house on Calle Castilla stands out for its age and size. At the entrance and saving the flow of the Alcanadre river is a robust bridge of medieval origin.

Hermitage of San Juan: This religious building has its origin in a Roman fortress. In the last restorations its primitive Romanesque style has been disfigured, disappearing among other things its primitive apse.

Other places of tour around Ballobar

Access road: The city of Fraga known for its beauty as the Sultana del Cinca, the monastery of Villanueva de Sijena, the Roman mansion of Villa Fortunatus, the hermitage of the Virgin of Chalamera ...

No road access: The close and twin Ripas of Alcolea.

Replenish your energy: Nothing better than the refreshing variety of fruit grown on the fertile banks of the Lower Cinca, from the velvety peaches to the famous figs.

Dreaming: Learn to fly, eternal illusion of man. And to do it to be possible also like the witch Cristineta that from these cantiles say that it was sent.

Have a good time: On August 15 and 16 the population of Ballobar celebrates its festivities in honor of Asunción and San Roque. In case of not being able to go, we have in mind that on August 29 there is another celebration known as the "Degollao" party.

Without forgetting that the farmland must cross the paths or its boundaries, never treading the sowing.

Texts extracted from the book: 30 circular excursions through the Alto Aragón

Loading...
Upps!
You're running a web browser we don't fully support. Please upgrade it for a better experience.
Our site works best with Google Chrome.
How to upgrade the browser