The hermitage of Santa María de Chalamera is located about 6.2 km from Ballonar. It is possible to reach the hermitage by road or following part of the GR261.

On April 25, the day of San Marcos is celebrated pilgrimage to the temple.

Coming from Ballobar, take the detour to the right in the direction of Alcolea de Cinca, going up the right bank of the Cinca.

To visit it you have to request the keys in the house we will provide the information to obtain them.

In a small amesetada elevation easily locatable and of wide views on great part of Cinca Medio this magnificent hermitage is located.

Its majesty is explained as head and seat, next to the castle of Monzón, of the Order of the Knights Templar.

The Order of the Temple

In the fourteenth century Pope Clement V through Bula, suppressed the Order of the Temple reigning James II in Aragon.

The soldier-monks did not accept this decision and presented resistance by arms. Chalamera and Monzón were his last defeated venues. Chalamera surrendered in February of 1309 and Monzón, a few months later. The Order of St. John of Jerusalem was the recipient of the goods of the Templars and kept them until the nineteenth. 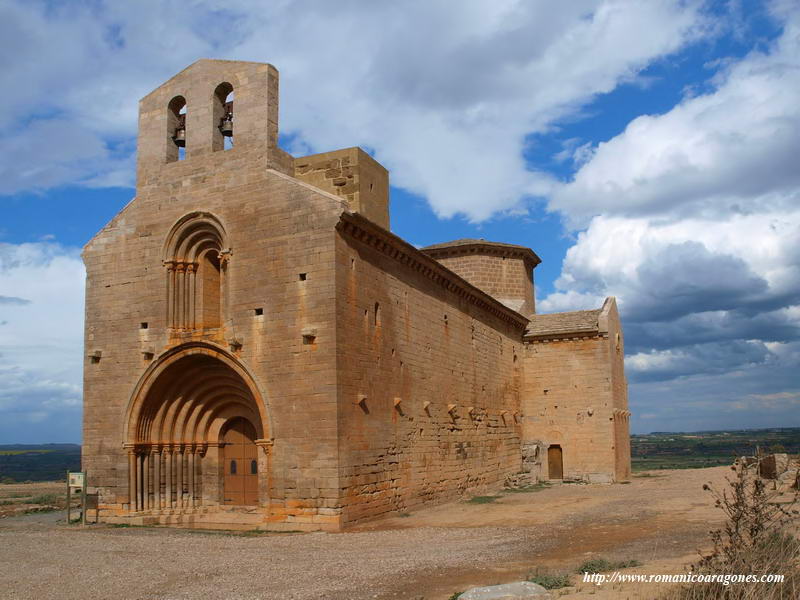 The temple has a Latin cross plan with a dome over the transept. In the west gable there is a magnificent flared doorway with reddish tones, similar to the one in the monastery of Villanueva de Sigena. Above we see a nice window, according to the cover.

The sensation when penetrating in its interior by the western porch is difficult to describe. You have to enter to feel it. The processional rites within him must have been overwhelming. 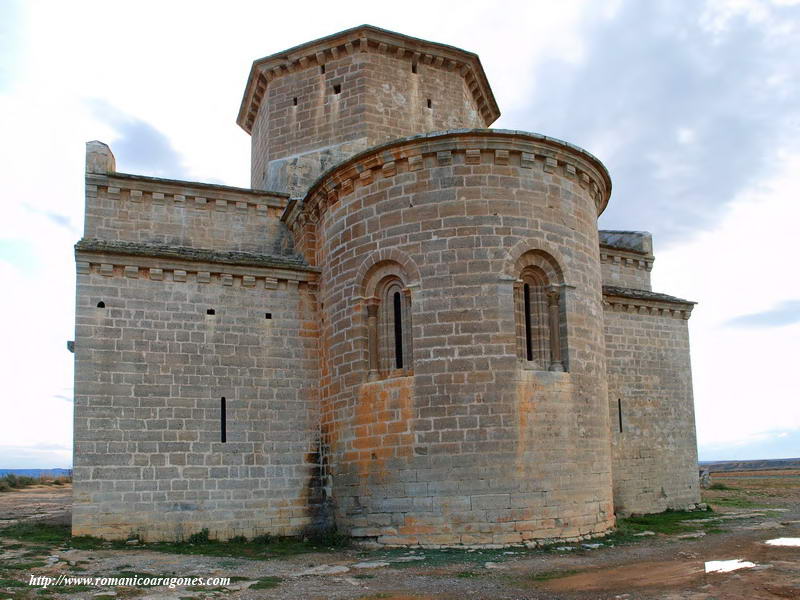 The building has been rehabilitated in the years 2001 to 2003

This the current look that can be seen from the road 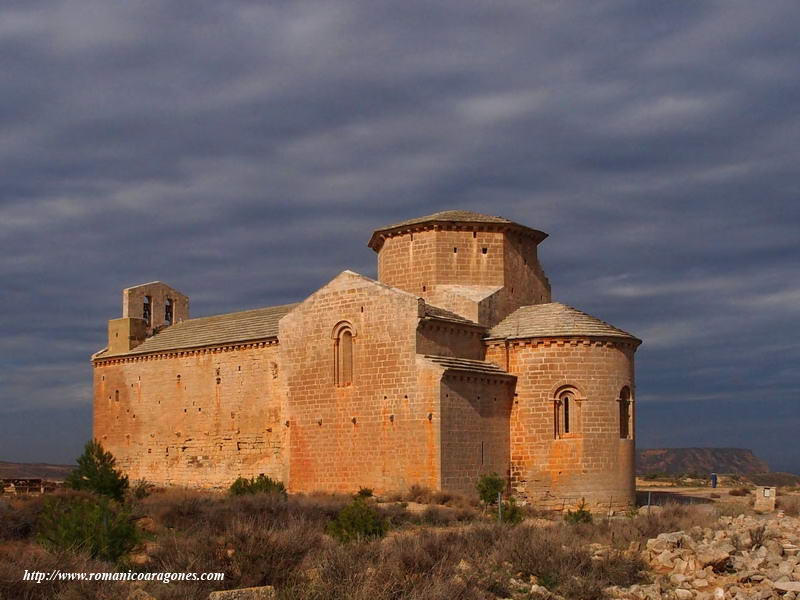 In the head of the temple it emphasizes his central apse, whereas the lateral ones are embedded in a species of wide buttresses advanced to the arms of the cruise. 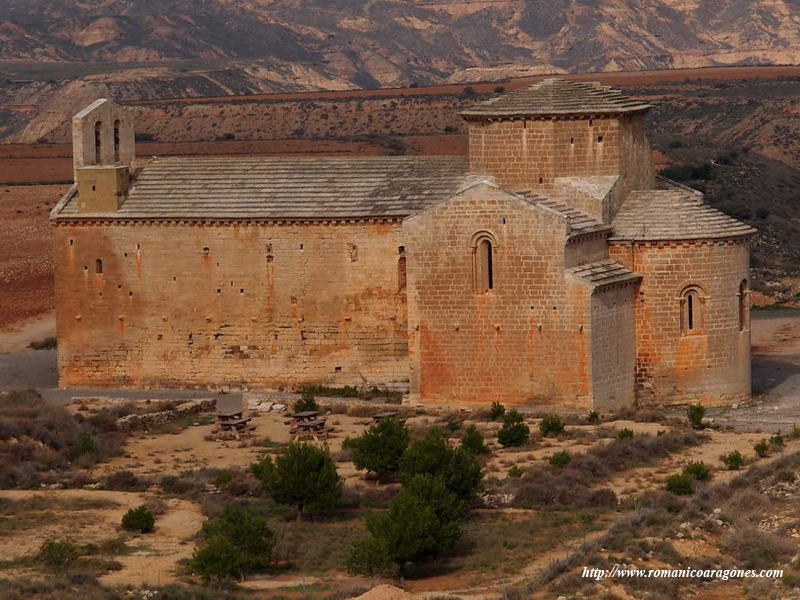 Three windows decorated with small columns and capitals open in its apse, while in the apsidioles are lobed. 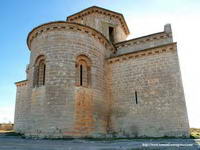 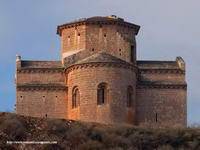 Long corbels support the cornices in the apse, buttresses of the apses and arms of the cruisers. Two of them in the central apse show a shallow decoration based on small rosettes. The marks of stonemason in the sillares of the temple are frequent. I bring one from the outside of the north wall, towards the feet that is repeated throughout the factory, and that I have not seen in any other of the temples visited. It is a circle with eight radios, perhaps as an elementary solar allegory and / or divinity. 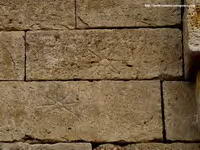 On the western canvas of the south arm of the cruise opens a second door. It is narrow and half-point veiled. On the same there is a lintel supported by corbels decorated with geometric motifs. The eardrum has a beautiful rose window. 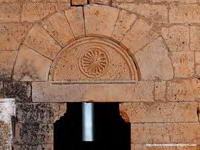 In the ship-cruiser dihedron there is an exempt arcosolio attached to the south wall that has lost the sarcophagus it contained in its day, as happened in Sigena with that of Rodrigo de Lizana. 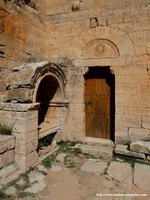 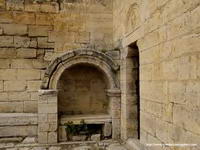 It has a marked archaic flavor and would not seem strange in a Roman funerary environment. 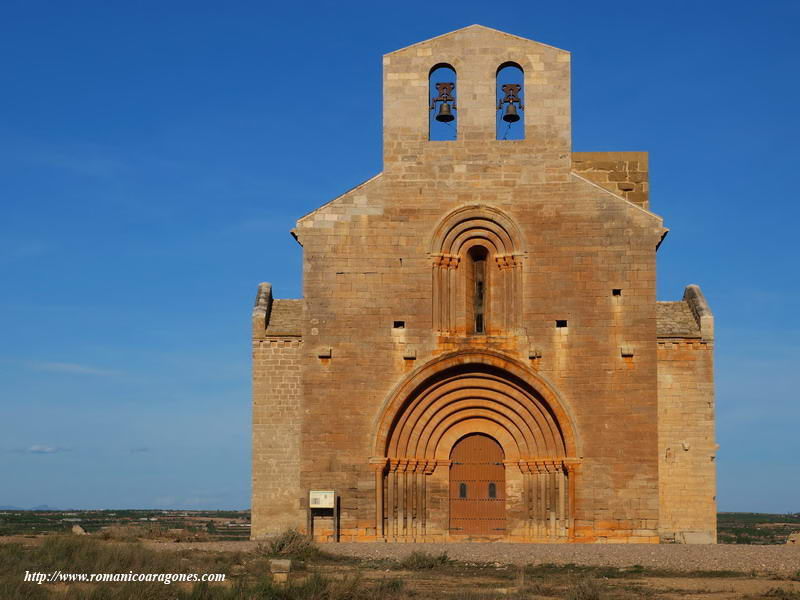 The western gable is simply spectacular 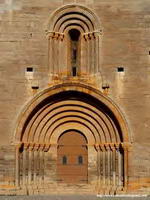 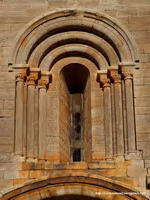 The cover crowned by a window as a replica of the same executed both structures in beautiful stone slightly reddish tone, are like the prelude to what we find inside.

A newly restored birora cattail completes its stamp. To its right on the roof, the upper portion of a torch-tower appears slightly like the five-vine.

The flared window on the cover is like a replica of it. Three archivolts of thick baquetón apean in other so many capitals of very elementary reasons to match those of the cover.

Six archivolts make up the cover, with a dust cover on the outside framing a vain voussoir. Its structure is markedly flared giving a good idea of the thickness of the walls of the temple. The outermost of the archivolts is really a subset of three others with the same radius, giving rise to a kind of half barrel vault decorated with baquetones, before starting the flare.

Eight pairs of reddish capitals under a zig-zag molding composed by the abacuses of the same complete the decoration. The theme of the same is varied, its style being very simple and announcing the Cistercian moment that is coming. 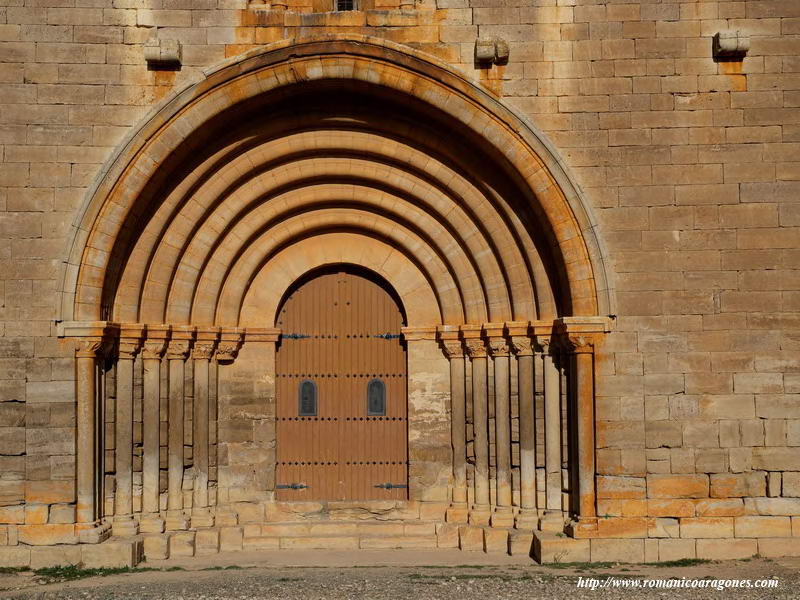 The funeral inscription is shown image it says so: "Sepulcrum: de bnar-do capellan oc ..". It must correspond to the burial of Bernardo, chaplain of the temple to which perhaps the roughly sculpted face corresponds. Under it some slabs attached to the wall could be the vestige of such burial

Loading...
Upps!
You're running a web browser we don't fully support. Please upgrade it for a better experience.
Our site works best with Google Chrome.
How to upgrade the browser